Sustainable initiatives for Our Future

A project for our planet and future. It is our duty and responsibility to leave this rich and beautiful earth to our future children. By changing the consciousness and behavior of each individual, by shifting each product and its materials into something sustainable, we can contribute to a better world for tomorrow. The Our EARTH Project is a part of our mission to promote this idea.

As a part of Our EARTH Project, we joined Japan Ethical Initiative and Circular Economy Japan. These organizations' work is based on SDGs(Sustainable Development Goals) suggested by United Nations towards a sustainable society and Circular Economy Action Plan by The European Commission. We agree with these policies, and make an effort to play a role for its realization. For details, please refer to each organization's HP. 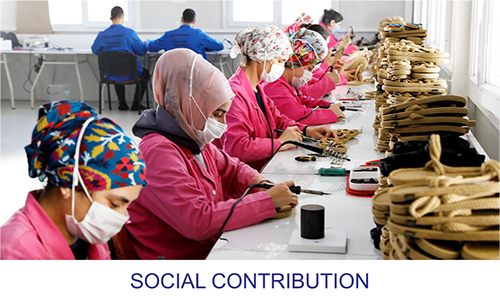 The Sanyei Kotobuki Building that serves as the head office for the Sanyei Group (completed in April 2012) gives consideration to the environment as follows.

In addition, 20,000 liters of water for fire protection is always available for fire emergencies in the community.

What is multiple sclerosis (MS)?

MS is a demyelinating disease of the central nervous system that causes numbness and paralysis in the hands and legs from a spinal cord or other disability, and it was designated as an intractable disease by the Ministry of Health, Labour and Welfare in 1972. There is variation in the incidence rate among races, and it occurs frequently in areas with high latitude. MS is common among Caucasians in Europe and North America, where it is said that there are 50 to 100 sufferers per 100,000 people. While the number of Japanese patients is on the rise every year, there are not any medical treatment methods for a complete recovery yet.

Why does Sanyei support the Japan Multiple Sclerosis Society?

The fundraising for the activities of the Japan Multiple Sclerosis Society are covered by donations based on the goodwill of companies and the general public.
We welcome the support of people who endorse the objectives of our activities, as it will enable us to conduct even more meaningful activities.