1946 to 1950s Establishment as an export trading company 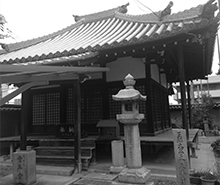 Kyoei Shokai, predecessor of
the present Sanyei Corporation,
was originally located
in the Kuhonji Daikokudo (in Osaka)

Kyoei Shokai was established in Osaka in 1946, just after WWII, as an exporter of accessories to Europe and North America. In 1961, three companies, each dealing in products intimately tied to its respective regional base, i.e. ceramics in Nagoya, and gifts etc. in Tokyo, merged to establish Sanyei Boeki (The company changed its name to Sanyei Corporation in 1971).

In the 1950s, light industry had begun to flourish in Asia, particularly in Hong Kong, and SANYEI foresaw the shift of export bases to Asia. While expanding its network in Asia, SANYEI accumulated production know-how by advancing itself as a manufacturer, and built its foundation as a trading company that is strong in manufacturing technology. Furthermore, SANYEI expanded its exports to Europe and North America. In North America, key customers were some of the world's largest retailers at the time, including Woolworth, JCPenney, Sears, and Kmart. In Europe, key customers included Woolworth in the UK and Germany, the Horten chain of department stores in Germany, and others.

Although SANYEI had been involved primarily with exports to Europe and North America since its founding, the rapid rise in the value of the yen triggered by the 1985 Plaza Accord led it to convert the primary business of its domestic offices to importing and increase its exports to Japan from overseas offices.

By concentrating the know-how it had built up in the OEM business, SANYEI developed a series of Brand businesses in the Japanese market. In 1983 SANYEI became the sole importing agent for BIRKENSTOCK and later launched its original brand Vitantonio. In 2007, SANYEI started handling hair care appliances under the mod' s hair brand.

In 2012, with the aim of enhancing its level of expertise, SANYEI established a four-division system in which the organization is structured according to product category.